The February reading of China’s official Manufacturing Purchasing Managers’ Index (PMI) fell from a growth-neutral reading of 50 in January to 35.7. The official PMI for the service sector plunged from 54.1 points in December to just 29.6 in February. The severity of this shift is underlined by the fact that there has never before been a reading of the services PMI below 50 points.

The PMIs are based on how firms see their economic situation in the current month relative to the previous month. A reading below 50 indicates declining prospects, while a value over 50 indicates an improving situation. The indices produced by the private business analytics firm IHS Markit also showed deep drops in their February manufacturing PMI (down from a January reading of 51.1 to 40.3) and a February services reading of 26.5 (down from 51.8).

China releases its January-February output and foreign trade data later in March. Even as it appears the government began to get a handle on the spread of the coronavirus, the daily data show only minor improvements in energy use, passenger and freight transport or commodity prices in February. News reports claimed an 80 % drop in car sales in February (down more than 40 % y-o-y in January-February). The only foreign trade information available for February so far concerns South Korea’s foreign trade with China. For January-February of this year, the value of South Korean exports to China was down 9 % y-o-y. South Korea saw its exports to China plummet 16 % last year.

In March, the economic situation will improve, even if there are various obstacles to recovery. Part of the problem is that mending the gaps in production chains across provinces and sectors will be a heavy task. The cautiousness and coronavirus fears of people, combined with delayed wage payments, depress the demand side. The spread of the coronavirus to other countries is likely to slow China’s recovery further.

Given the way PMIs are calculated, it is evident that their readings will improve in March from February lows. A more interesting issue in coming months, however, is whether the readings recover to stable levels above 50 as that would signify China’s return to a growth path and a making-up of lost production. 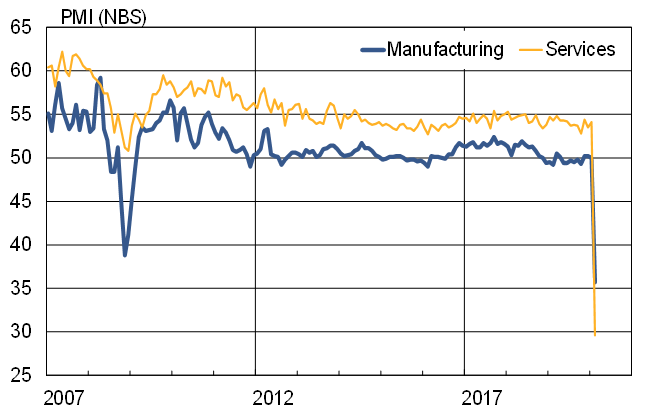