At its February meeting, the board of the Central Bank of Russia decided to reduce the key rate by another 25 basis points to 6 % p.a. Consumer prices increased 2.4 % y-o-y in January. Inflation has slowed in recent months more than the CBR had earlier forecast due to Russia’s sluggish economic growth and ruble appreciation. The base effect from last year’s hike in the value-added tax also drags down inflation this year.

Governor Elvira Nabiullina gave a clear signal that the CBR’s accommodative monetary stance would continue. She indicated that a further rate cut is probable at the next meeting, implying a shift from a neutral monetary policy stance to a stimulative one. The CBR left untouched both its GDP growth forecast for this year (1.5–2 %) and its inflation forecast (3.5–4 %). The CBR’s inflation target is 4 %.

A downward trend in Russia’s key rate has continued practically the past five years. In late 2014 the CBR had to hike the rate notably in the wake of a collapse in oil prices and geopolitical uncertainty. The key rate is currently at its lowest level since Russia annexed the Crimean peninsula. Credit interest rates have also dropped to historically low levels. The average interest rate on ruble-denominated corporate loans of over a year fell below 9 % in November.

In light of Russia’s muted economic growth of recent years, the economy ministry, which is responsible for presenting the cabinet with policies that promote growth, has criticized the CBR for too slow monetary easing. Andrei Belousov, Russia’s new first deputy prime minister and responsible for economic issues, has also advocated for looser monetary policy. The critics view lower financing costs would boost Russia’s modest investment levels, whereas the CBR underlines the role of structural factors as obstacles to growing fixed investment in Russia.

President Vladimir Putin has been supportive of the CBR’s monetary policy framework, remarking also in his January state-of-the-nation speech on the contribution of moderate inflation for economic stability. Inflation also shows up repeatedly among the top issues of economic concern in surveys of the general public. The CBR’s monetary discipline has supported the reduction of Russia’s consumer price inflation to the historic lows in recent years. 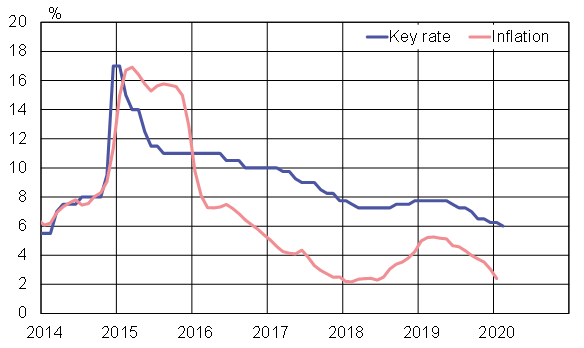