The original 2019 budget approved a year ago anticipated an increase of just over 5 % in central and local government revenues from the previous year. However, the revenue growth turned out to be below 4 %. Especially local governments fell behind in the budget. When the budget was adopted a year ago, the finance ministry already noted that the revenue-side budget will be hard to meet. Last year’s expenditures, in contrast, slightly overshot their budget targets, raising the government’s current official budget deficit estimate to nearly 5 % of GDP.

China’s budget figures do not give a complete picture of what is happening in the public finances. Local governments, in particular, engage in extensive off-budget operations. For example, they channel investments through local government financing vehicles, earn money selling land rights and issue special purpose bonds to finance projects. The IMF calculates estimates for China’s general government finances, which take into account off-budget activities. The figures show that the public-sector deficit has exceeded 10 % of GDP in recent years – and has been growing. The IMF estimates China’s total public debt-to-GDP ratio to be currently around 70 %.

The coronavirus crisis has exacerbated in particular the distress of provincial economies. Restrictions on movement, widespread production shutdowns or operations limited to skeleton crews will be a huge blow to their revenues, but at the same time there is need to increase expenditures as the government must somehow revive economic growth and help companies make it through trying times. Moreover, China’s leadership remains stubbornly fixated on meeting the growth targets set for this year, which would require increasing stimulus heavily.

China’s budgets are typically approved annually at the National People’s Congress in early March. This year’s NPC will not be convened as usual due to the coronavirus epidemic, so there is no information available on this year's budget. No new date for the NPC has yet been announced.

China’s public-sector spending, revenues and deficit based on IMF estimates 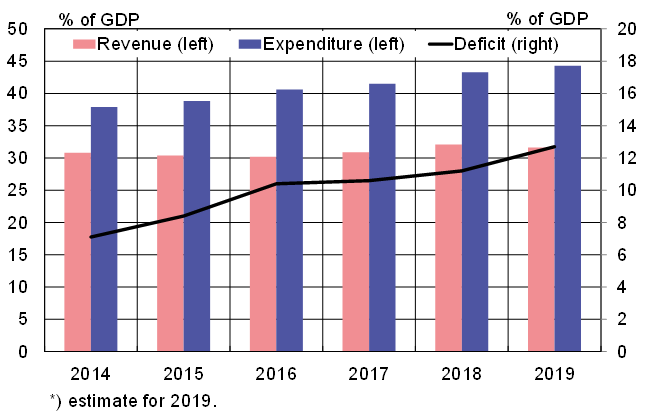