Most forecasts show the volume of Russian natural gas production rising by 1–2 % a year over the next few years. Gas production is largely constrained by moderate demand outlook. Russian gas production has traditionally focused on the Yamal-Nenets autonomous region in western Siberia, which features the traditional huge gas deposits. Production growth focus is shifting to the Yamal peninsula and eastern Siberia. On the Yamal peninsula, Novatek is starting a new LNG project (Arctic LNG 2), while Gazprom is developing the Kovykta gas deposit in eastern Siberia.

The February forecast of Russia’s finance ministry envisions an increase in gas export volume of a few percent in coming years. Transmitted gas volumes to China are being ramped up gradually with the opening of the Power of Siberia pipeline in December. Current planning calls for the pipeline to supply China with around 5 billion m3 of gas this year and 10 billion m3 next year. The coronavirus epidemic could, however, depress gas demand in China. 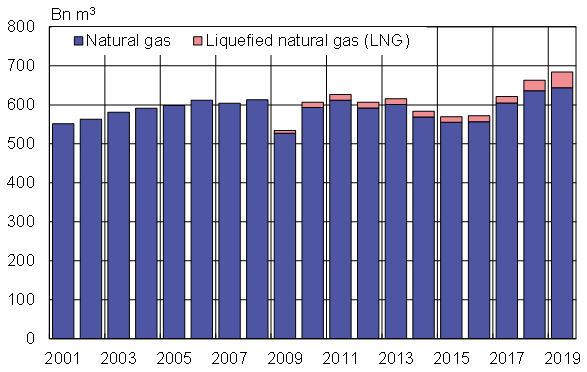