Russian crude oil production (including gas condensates) last year edged up by a percent. The output was 560 million tons (11.3 million barrels a day) reaching its highest level in the post-Soviet era. The International Energy Agency (IEA) ranked Russia last year as the world’s second largest producer of crude oil after the United States.

Most forecasts expect Russian oil production to remain nearly unchanged this year. Production growth is restricted e.g. by Russia’s agreement with the OPEC+ that was renewed in December. OPEC+ includes OPEC members and nine other oil-producing countries. Russia is in talks with OPEC on further production cuts to deal with the negative demand shock from the coronavirus epidemic. Even if the February forecasts of the International Energy Agency (IEA) and OPEC factor in the negative impact of the coronavirus on crude demand, both still see global oil demand rising by nearly 1 % this year.

About 270 million tons (5.4 million barrels a day), or almost half of Russia’s crude oil output was exported last year. The export volume increased by almost 3 %, despite the contamination of the Druzhba oil pipeline in April that restricted supplies for several weeks. January-September figures show that just over half of Russian crude oil exports last year went to the EU, while over a quarter went to China. The value of Russian oil exports last year was about 120 billion dollars, and exports of petroleum products 70 billion dollars (together 11 % of Russian GDP). In its February forecast update, Russia’s finance ministry said it expects the volume of crude oil exports to increase by nearly 2 % this year, but then decline slightly in following years. 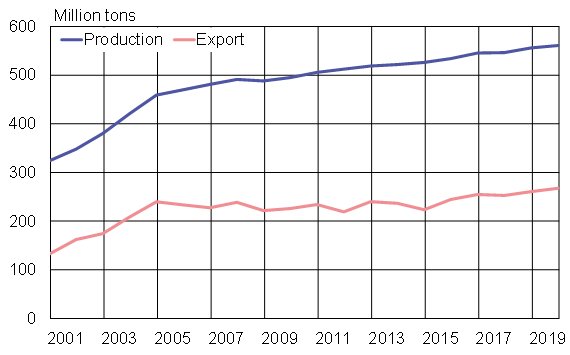