Rosstat’s preliminary breakdown of GDP categories indicates that the overall volume of Russian exports of goods and services decreased by about 2 % last year. It was the first such drop in a decade. The statistics on goods trade suggest that most of the export decline reflects notable decreases in export volumes of iron and steel products as well as cereals. These products together account for approximately 10 % of Russian goods exports. Russia’s exports are still dominated by oil and gas, which accounted for over 60 % of Russian exports last year. The total export volume of crude oil and petroleum products remained nearly at the same level as a year earlier. The volume of natural gas exports rose by almost 6 %, mostly on growth in Russia’s liquefied natural gas (LNG) industry. The value of goods exports slid by 6 % to 425 billion dollars. The value of exports was dragged down by drops in commodity prices and declining volumes.

A breakdown of Russia’s GDP figures shows that the volume of goods and services imports to Russia increased by 2 % last year. Ruble appreciation helped boost import demand; the ruble's real effective (trade-weighted) exchange rate was up 2.5 % last year. Within trade in goods, imports in the machinery, equipment & vehicle sub-category remained unchanged and constituted about half of imports. The volume of chemical products, metal products and textiles was up 5–8 %. The value of goods imports was approximately 250 billion dollars, an increase of nearly 3 % y-o-y.

The geographical structure of Russian goods trade in 2019 followed the trends prevailing in previous years. The EU was still Russia’s largest trading partner, accounting for 45 % of exports and 36 % of imports, but the EU’s share remained on a slight declining trend as the share of Asian countries increased a bit. Russia’s most important single trading partner was China, which last year accounted for 13 % of Russian goods exports and 22 % of goods imports. China’s share of Russian goods exports has more than doubled in the 2000s, while the share of goods imports has tripled. 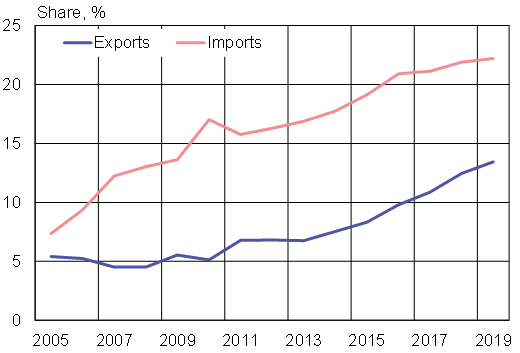