At the end of last year, the People’s Bank of China changed the definition of its broadest credit measure Aggregate Financing to the Real Economy (AFRE, previously Total Social Financing), adding in from 2016 onwards the debt portfolios of central and local governments (38 % of GDP as of end-2019). The AFRE also includes the bank credit stock (155 % of GDP), select shadow-banking instruments (entrusted and trust loans, as well as undiscounted bankers’ acceptances, amounting to 22 % of GDP), net corporate bond financing (24 % of GDP) and non-financial corporates equity financing (7 % of GDP). AFRE grew by 11 % last year to 254 % of GDP (up from 247 % at the end of 2018). The stock of shadow-banking instruments declined last year by 7 %, while the stocks of corporate and government bond issues rose by 13–14 %. 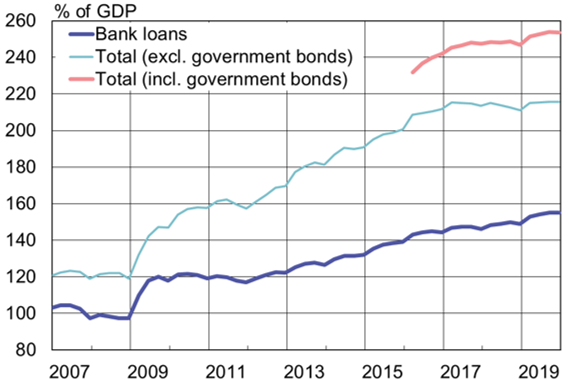