GDP of the Hong Kong special administrative region (SAR) last year fell by 1.2 % y-o-y. GDP growth was down 2.9 % y-o-y in the fourth quarter as GDP fell for the third consecutive quarter. Hong Kong’s growth has slowed for two years, hit by the flaring of trade tensions between China and the US in spring 2018, the slowdown in mainland China’s growth and last summer’s pro-democracy demonstrations. The outbreak of the coronavirus epidemic in China has only made things tougher for Hong Kong.

The uncertainty from political tensions last year weighed heavily on the Hong Kong services sector, which accounted for 88 % of total GDP in 2018. In particular, tourism and related retail activity suffered major losses with a 50 % decline in tourist numbers. An average of 5.9 million tourists a month visited Hong Kong during January-May 2019. Of that number, 4.7 million tourists a month came from mainland China. During the September-December period, the number of tourists averaged just 3 million a month, of which mainland visitors averaged around 2.3 million. Hotel occupancy rates fell from about 90 % to just 61 % in December. In the final quarter of the year, retail sales were down by 25 % y-o-y.

Hong Kong's economic situation remain precarious. The January reading of manufacturing and service industry purchasing managers’ index (46.8) indicates an ongoing decline in production, even if the latest index reading was the highest since June. The coronavirus epidemic is putting an additional dent in tourism and the Hong Kong economy. The Hong Kong SAR closed most border-crossing points with mainland China after protests from health workers. Schools in Hong Kong remain closed and many bank branches have decided to keep their doors shut. Moreover, the outlook continues to be overshadowed by the general slowdown of the Chinese economy, political uncertainty, as well as tensions between China and the US, which continue despite the Phase 1 trade truce signed in January. 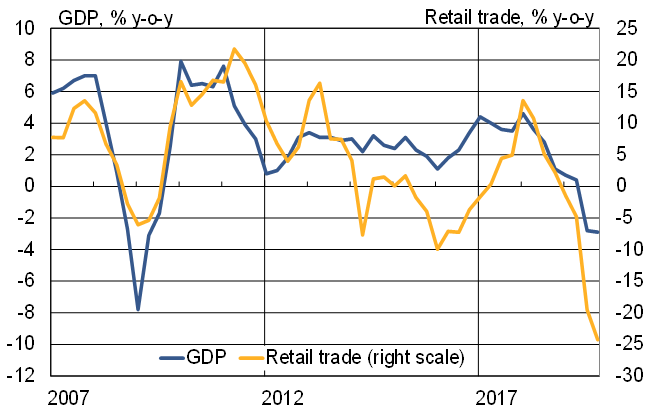