China imported 506 million metric tons of crude oil last year, a 9.5 % increase from 2018. China’s oil imports has risen in recent years steadily by about 10 %. China’s domestic crude production peaked in the middle of last decade at 215 million tons a year before declining to an annual level of around 190 million tons over the past three years. As the world’s largest crude oil importer, China plays a key role in the global oil market.

China has effectively diversified its oil sourcing. Saudi Arabia last year re-established itself as China’s top oil supplier with a share just over 16 %, while Russia held onto second place, supplying over 15 % of China’s oil imports. The next largest suppliers were Iraq and Angola, each with shares around 10 %. Official Chinese figures show that imports of Iranian oil have fallen sharply since April 2019, when the US tightened its sanctions on Iran crude oil exports. Iran’s share of China's crude imports fell by half to roughly 3 % last year. As recently as early 2018, Venezuela provided about 5 % of China’s oil imports, but in the final months of 2019 China imported no oil from Venezuela. Some crude oil has been brought also from the US over the past couple years. Imports from the US last year fell by half to 6 million tons, or just 1 % of China’s total oil imports.

Some of the recent increase in oil imports reflects new refineries coming on stream in China. They add to over-capacity in the branch and boost the volumes of refined petroleum product exported from China. China has rapidly emerged as the fourth-largest exporter of petroleum products in Asia after South Korea, Japan and India. China’s overcapacity could cause new trade policy disputes.

Disruptions in production and transport flows caused by the coronavirus epidemic are expected to reduce Chinese oil demand over the short term. Uncertainty about China largely explains the recent major price swings on global oil markets. 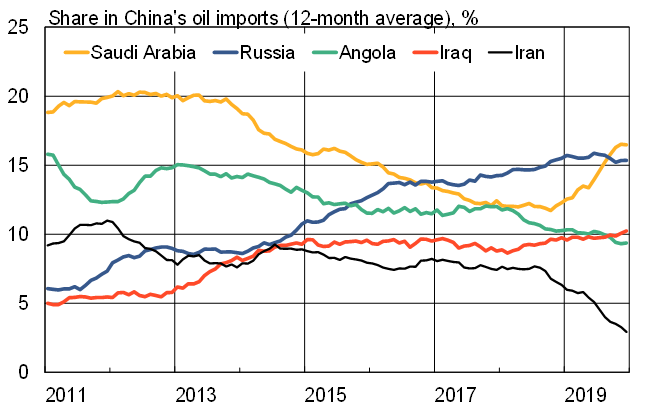