Preliminary balance-of-payments figures from the Central Bank of Russia show that revenues from exports of goods and services fell 5 % last year in dollar terms (unchanged in euro terms). The decrease in revenues that began in the second quarter steepened towards the end of the year. Export prices fell slightly last year after rising in 2017−2018, when export revenues climbed up by over 20 % a year. Significantly lower energy prices last year were reflected in lower revenues from energy exports that drove down the export revenues overall. Revenues from exports of non-energy goods and services experienced feeble growth after two years of brisk increases.

Imports of goods and services to Russia collapsed in 2015 after a slide in oil prices, lower export earnings and a decline in the ruble’s exchange rate. The subsequent recovery in imports still came to a halt in autumn 2018 until imports began to revive again in the second half of 2019, when on-year growth in spending on imported goods and services rose by well over 10 % in euro terms. The revival reflected a stronger ruble. In the fourth quarter of 2019, the ruble’s real exchange rate was up by 10 % y-o-y against the euro and up over 6 % against the Bank of Russia trade-weighted currency basket.

Russia’s goods trade surplus contracted in 2019 as a result of the drop in the value of exports and the increase of imports. The deficits in other current account categories continued to deteriorate, reducing the overall current account surplus from around 7 % of GDP in 2018 to slightly over 4 % last year.

The net outflow of capital from the private sector decreased in 2019, largely due to higher inflows of direct investment (FDI) from abroad to Russia’s corporate sector (banks not included). FDI to Russia only amounted, however, to about one-and-a-half percent of GDP. The outward FDI of Russian firms roughly equalled inward FDI to Russia. The outbound capital flows of banks declined reflecting banks’ efforts to reduce their foreign debt in previous years. Russia’s entire financial account was roughly in balance as the private capital deficit was offset by government net capital imports as foreign investors make substantial purchases of federal bonds on secondary markets. 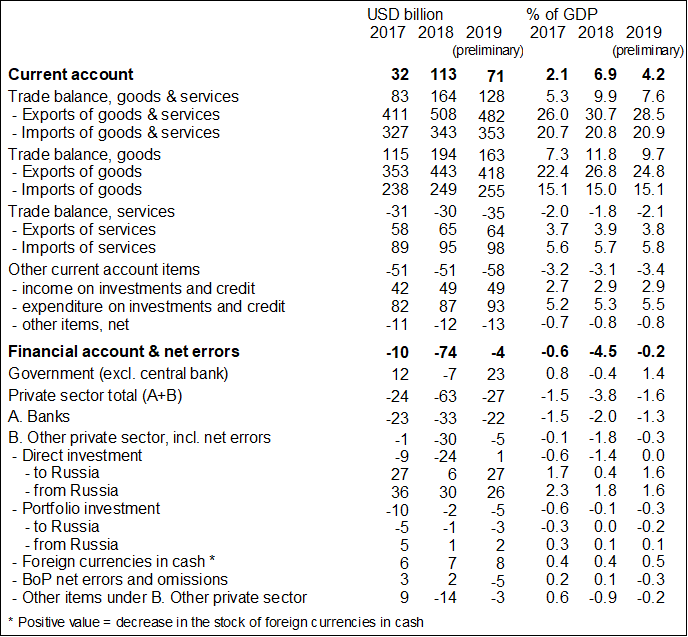