On-year growth in Chinese industrial output slowed from over 6 % in June to below 5 % in July. Notably, on-year growth in car manufacturing has been negative in every month for over a year according to the China Association of Automobile Manufacturers (CAAM). Manufacture of passenger cars was down 18 % y-o-y in July. Real growth in retail sales slowed over one percentage point to below 6 %.

Producers face the challenge of producer price deflation. In July, after a long slowdown, producer prices contracted by 0.3 %. It was the first time since August 2016 that there was an on-year decline in producer prices. Lower prices hurt corporate bottom lines, which in turn makes firms reluctant to invest. Consumer price inflation (2.8 %) was practically unchanged from the previous months.

China’s economic slowdown, combined with the negative impacts of the trade war on international production chains were evident in the value of exports to China from its neighbouring countries. In January-July, China exports were down sharply for Japan (down 9 % y-o-y), South Korea (down 17 %) and Taiwan (down 8 %). 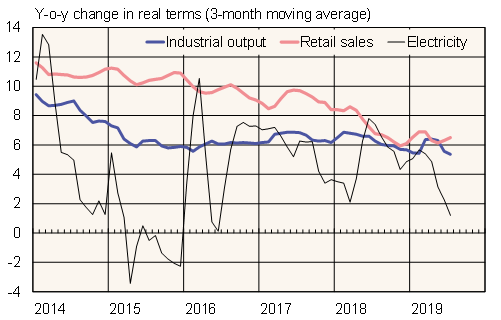