Budget revenues from sources other than oil and gas taxes increased by 13 %, i.e. the same swift pace as last year. They accounted for 78 % of all revenues to the consolidated budget. In particular, revenues from corporate profit taxes continued to climb fast (by 20 %), while VAT revenues, thanks in part to the VAT increase at the start of the year, were up by 18 %. Revenues from income taxes and wage-based mandatory social taxes continued to show fairly strong growth (up 9 %).

As last year, spending increases largely went to health care, education and the housing sector. Spending on pensions and other social supports continued to show moderate rises that roughly matched the inflation rate. Spending on administration, domestic security and the economy rose by just a couple of per cent, while defence spending shrank. The ratio of spending-to-GDP has declined for many spending categories due to their low rates of increase. However, growth in budget spending overall is expected to pick up in the second half of this year to the extent that implementation of national projects set forth in president Putin’s 2018 May decree gets underway more properly. 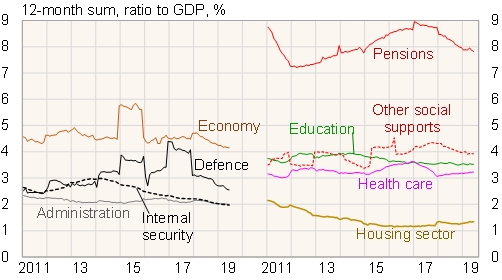