As the euro weakened slightly against the dollar between the second quarter of 2018 and the second quarter of 2019, the value of Russian imports measured in euros did not fall but rather remained roughly at the same level. As nearly half of goods imported to Russia come from the euro zone, the euro-dollar exchange rate has a major impact on the trade figures. The decline in the value of exports can be attributed to some extent to a decline in oil prices.

China continues to gain importance as a major trading partner with Russia. For the 12-month period ending in June, 22 % of all Russian goods imports came from China, while 13 % of Russian goods exports went to China. In recent years, China’s share in both imports and exports has risen by about one percentage point a year. Oil, gas and coal account for about three-quarters of Russian goods exports to China. Other major export goods include wood, metals and fish. About half of Russia’s goods imports from China consist of machinery and equipment. Other goods include various intermediate products and consumer goods such as shoes, clothing, toys and furniture. Russia trades similar goods with other countries and the composition of Russian-Chinese trade has not changed considerably during recent years. 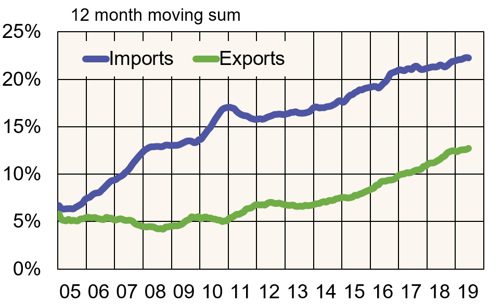