The CBR’s foreign currency and gold reserves have grown quickly this year. As of August 1, the reserves stood at about 520 billion dollars, an amount sufficient to cover about 18 months of imports of goods and services.

The increase in forex and gold reserves largely reflects the forex purchases that have continued from 2017 and 2018. The CBR makes them on the domestic currency market for the finance ministry. The finance ministry orders forex from the central bank at the pace that excess oil revenues flow to the federal budget.

The CBR’s reserves have also been augmented by purchases of gold, which this year have nearly sustained the brisk pace of 2017 and 2018. The spike in gold prices in June gave a notable increase to the value of the CBR’s reserves. Gold makes up about 20 % of the reserves. The CBR holds the fifth largest gold reserves of any central bank in the world. 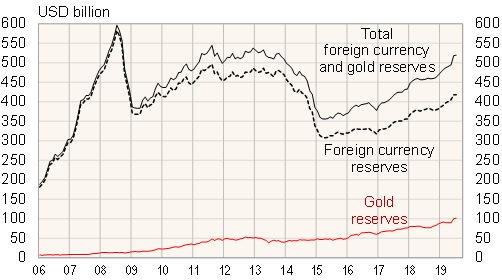