The finance ministry deposited over 65 billion dollars (equal to about 4 % of GDP) in the National Welfare Fund in July. As of August 1, the Fund’s assets stood at 124 billion dollars (over 7 % of GDP). Of that, almost 99 billion dollars (5.7 % of GDP) were liquid assets that are held at the central bank in forex. The other assets of the Fund are tied up in e.g. investment project financing.

Each year, the excess oil tax revenues from the previous year must be transferred to the Fund by October 1. The federal budget rule defines that such excess revenues arise when the actual world market price for oil exceeds the rule’s reference oil price for the year. The reference price for Urals-grade crude oil rises 2 % every year and was 40.8 dollars a barrel last year, while the actual outcome was almost 70 dollars. “Oil tax” revenues consist of taxes on oil and gas production, as well as export tariffs on oil, gas and petroleum products.

The Fund’s reserves can be used on e.g. new investment projects when its liquid assets exceed 7 % of GDP. That sum has accrued because excess oil tax revenues in January-July this year amounted to well over 1.5 % of annual GDP. These excess funds will eventually be moved to the Fund but are until then waiting on other government accounts at the CBR. 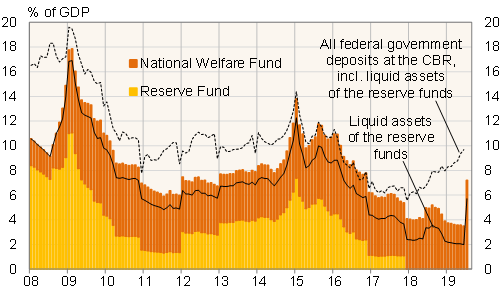