The Central Bank of Russia reports that services exports last year rose by 12 % and service imports by 7 %. Thanks to some extent to the FIFA World Cup, travel service exports were up by 28 %.

In 2018, foreigners purchased Russian services worth a total of 65 billion dollars. Of that, 18 % consisted of tourism services, while 34 % was transport services. Air transport accounted for the bulk of spending on transport services. Of service exports, 11 % went to countries in the Commonwealth of Independent States (CIS), 45 % to Europe and 5 % to China.

Russians last year purchased services from abroad worth a total of 94 billion dollars. Of that, 36 % is due to tourism services and 16 % to transport services. Of service imports, 6 % came from CIS countries, 51 % from Europe and 3 % from China. Turkey, a favourite holiday destination for Russians, accounted for 7 % of service imports. Egypt, once a popular vacation destination, lost its position after a terrorist attack on a Russian charter plane in 2015 and Russia’s ban on package tours to Egypt. Although the ban was lifted last year, charter flights to Egypt have yet to resume. 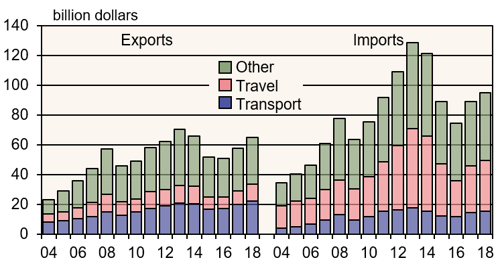