Developments in Russian defence spending are very similar in figures compiled by the Ministry of Finance (MinFin), the Stockholm International Peace Research Institute (SIPRI) for its global defence spending assessment and the Russian Presidential Academy of National Economy and Public Administration (RANEPA), which has its calculations published by the Gaidar Institute for Economic Policy (IEP). In real terms, adjusted for increases in domestic producer prices and wages, Russia’s 2018 defence spending was about the same as the augmented level in 2014. The ratio of defence spending to GDP was also about the same as in 2013 (MinFin 2.7 %, SIPRI 3.7 % and IEP just over 4 %). Defence spending still accounts for a large share of total government sector spending (MinFin over 8 %, SIPRI and IEP 11−12 %, i.e. slightly more than spending on education or healthcare).

Added to the MinFin data for defence spending, the figures published by SIPRI and IEP include notable items from other budget spending categories. The biggest items added are military pensions, spending on domestic security as regards the national guard and border control, and classified budget spending on the economy. In the past two years, these additional spending items accounted for 27 % of total defence spending in SIPRI’s figures and 33 % in the IEP figures. The IEP also publishes RANEPA figures for bank credit to defence industry. Repayment of bank loans exceeded new borrowing in the past few years by a sum equalling 0.2−0.3 % of GDP. 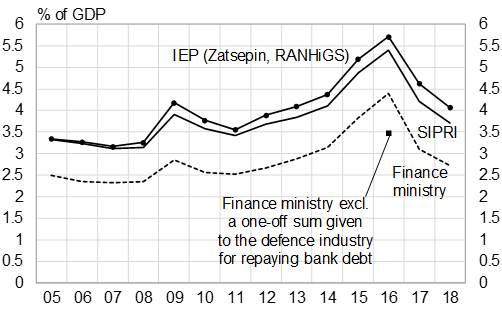