On April 1, Bloomberg Barclays added yuan-denominated bonds issued in mainland China to its Global Aggregate Index. The weighting of Chinese bonds in the index will rise incrementally over the next 20 months to 6 %. Yuan bonds were also added to two other Bloomberg Barclay bond indices. Mainland Chinese bonds have never before been included in any major global index.

The rapid growth of China’s bond markets since 2015 is largely a reflection of growth in local-government indebtedness. Foreign investor ownership in mainland China is, however, concentrated almost entirely in sovereign debt or bonds issued by the three state policy banks. FTSE Russell, one of the biggest index producers, is also considering adding Chinese bonds to its main index next autumn. J.P. Morgan, too, is contemplating the move, but has yet to include Chinese bonds.

The Bloomberg Barclays Global Aggregate Index is followed by about 2.5 trillion dollars in managed assets. Many investment banks assume that investors are reluctant to immediately shift investments to China as a passive tracking of the index would suggest. Even so, the credibility from index inclusion should bring in over 100 billion dollars in investment to China over coming years. That amount would increase if other central indices also include mainland Chinese bonds.

Index inclusion reflects the opening up of China’s financial markets to the world, but there is still plenty of room for improvement. Foreign investors can presently only participate in China’s bond markets through special programmes. Moreover, the availability of financial instruments to hedge interest-rate or currency risk is limited. Shifting investment assets to China is further restricted by the relatively low liquidity of Chinese markets and the fact that it is difficult to anticipate or defend against official regulatory changes. 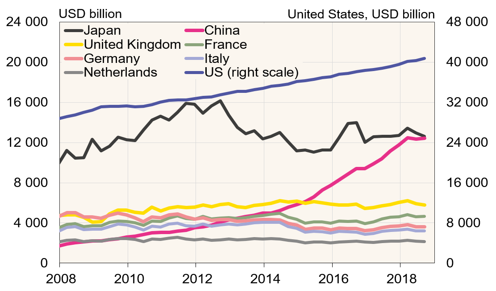