One of the twelve programmes included in president Putin’s inaugural May Decrees of 2018 (BOFIT Weekly 08/2019) seeks to improve the environment. The programme in principle deals with all environmental problems, but waste management is given a rather prominent place in it. Dumps constitute a contentious issue is Russia as citizens have started to pay more attention to the problems involved with it. In contrast, climate emissions play a small role in this programme.

While the cost estimate has fluctuated since May 2018, the plan released in February calls for 4.041 trillion rubles or a bit more than 50 billion euros during 2019-2024. This corresponds to about half a percent of gross domestic product. Polluting firms are expected to finance up to three-quarters of the national project, while the state will subsidise interest payments on loans taken for this purpose. The firms are expected to raise funds by issuing special green bonds. Money raised by these kinds of bonds is earmarked for environmental investments. Russia’s first green bonds were issued in December on the Moscow Exchange. 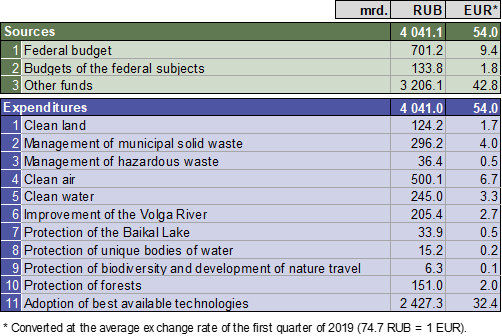 However, the principles for calculating the costs may not be straightforward. The figures may include already-funded public works, and the companies might have planned to make some of the investments even without the project. According to the finance ministry’s estimate, the programme doubles direct federal spending on environmental protection.

The programme has evoked contentment as well as contempt. While the plan mentions several concrete actionable measures to be taken at the worst polluted sites, it falls short of giving a precise description of a general tightening of environmental regulation. For example, World Wildlife Fund (WWF) Russia has pushed for greater focus e.g. on recycling, modernisation of production methods and improving the market environment for small waste management firms.