The use of new forms of electronic payments has increased rapidly in Russia, and the Central Bank of Russia has clearly indicated its intention to participate in this trend. The CBR aims to create safe payments systems that are independent from foreign banks and financial institutions. With this goal in mind, since 2014 Russia has built e.g.  CBR-owned national payment systems, and the national payment card Mir.

At the beginning of this month the CBR launched its own fast payment system SBP, designed to allow for immediate transfer of funds between client accounts. Although a group of 40 banks has signed up to participate in the system, Sberbank, Russia’s biggest bank and the unchallenged market leader in card payments, has yet to join.

A sizable chunk of retail payments in Russia are made with the card-to-card payment systems mostly based on Visa and Mastercard. The authorities may hope the CBR’s SBP system will move at least some payment traffic to domestic platforms. 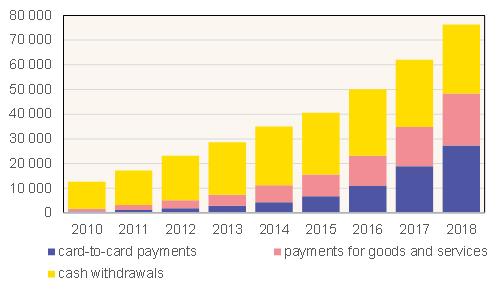