Fixed investment rose by 4.3 % last year (4.8 % in 2017, with Rosstat’s latest round of revision raising the figure a bit). The level of fixed investment was no longer more than about 3.5 % below its 2013 peak. Investment growth dropped below 3 % y-o-y in the fourth quarter of 2018, but the figure for the first nine months of the year was revised up. Together with the earlier upwardly revised growth figures for the construction sector this reaffirms the setup where the surprisingly strong GDP growth in 2018 figures rest partly on improved data for January-September (revised quarterly GDP data will be released in early April).

The pace of investment last year was typical of nearly all years in this decade, when investment of large and mid-sized firms, as well as the government, increased slower than total investments (just over 2 %). Instead, other investment such as small firms and households, Rosstat says, rose some 10 %. 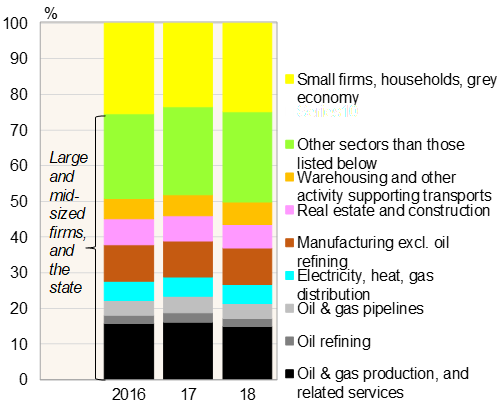