The trend in Finnish-Russian trade last year reflected Russian foreign trade generally. Due in part to ruble depreciation, Russians cut back on their purchases of foreign goods and services abroad. The value of Russian goods exports was lifted by higher oil prices.

According to Finnish Customs, goods exports from Finland to Russia totalled 3.3 billion euros last year, or 3 % less than in the previous year. Russia accounted for 5 % of the value of Finland’s total goods exports. Russia’s share has diminished considerably during recent years. In 2013, nearly 10 % of Finnish exports went to Russia. Finland’s main export goods include machines and paper.

Finland last year imported from Russia goods worth 9.3 billion euros, or 13 % more than in the previous year. Russia’s share of Finland’s good imports was 14 %. The value has grown mainly due to higher oil prices as fossil fuels represent two-thirds of Finland’s goods imports from Russia. However, it is noteworthy that a significant share of the oil that Finland imports is exported after refinement. Finland also imports a considerable amount of wood, metals and chemicals from Russia.

According to Statistics Finland, Finns annually produce just under 1.5 billion euros in services for Russians. While the value has increased over the past two years, it depends to a large extent on Russians’ willingness to travel. That in turn is affected by the ruble’s exchange rate, and the ruble fell about 10 % against the euro during last year. Around the New Year holiday period Russians spent about 10 % fewer nights in Finland than a year earlier. During last year, Russian travellers accounted for 12 % of overnight stays by foreigners. About 5 % of all Finnish services provided to foreigners went to Russians.

Russians annually provide Finns with services worth nearly 1 billion euros. Russia accounts for 3 % of Finland’s service imports. Transportation services represent about half of the services Russians produce for Finns. 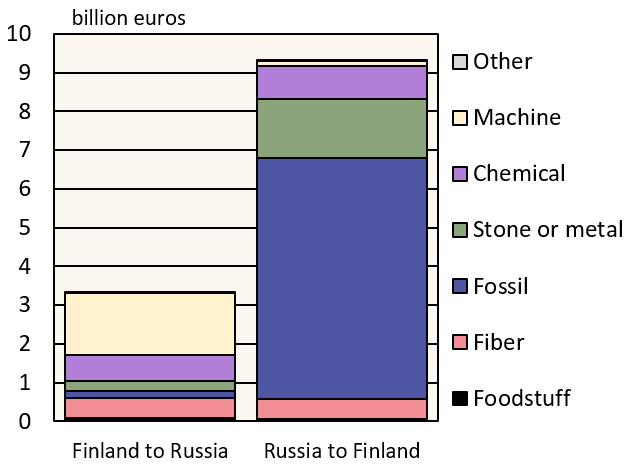