Revenues to the consolidated budget (federal, regional and municipal budgets plus state social funds) increased by about 20 % in 2018. The ratio of revenues to GDP climbed to over 35 % – the highest level in ten years. Nearly half of the increase in revenues came from oil & gas tax earnings (BOFIT Weekly 2019/06), which now account for almost a quarter of total consolidated budget revenues. The share hit 28 % in peak oil price years.

Other budget revenues were up by nearly 14 %. Revenues from corporate profit taxes and value-added taxes rose most swiftly and at the fastest rate since 2011. Other key categories, particularly revenues from mandatory payroll social contributions and labour income taxes, showed substantial increases. This reflects further improvements in tax collection.

After a few lean years, consolidated budget spending was up by about 6 % last year, i.e. a couple of percentage points higher than inflation. The ratio of spending to GDP fell to around 33 %, about the same level as in the early years of the current decade. The biggest spending increases were seen in health care (18 %) and education (12 %). Much of the higher spending came as these sectors received large wage increases last year based on earlier state decisions. The increases in education spending were focused on preschool, primary education and vocational training. The rise in spending on civil administration accelerated to nearly 10 %, focused, among others, on funding tax, customs and financial market supervisory authorities. Spending on the economy increased only slightly, although brisk spending increases on roads continued. 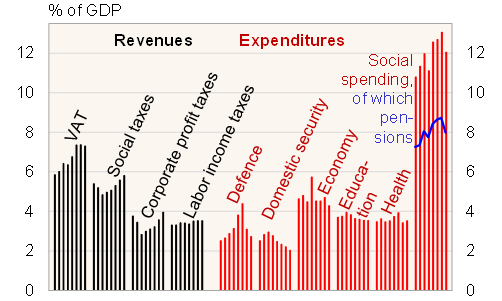 Sources: Ministry of Finance and BOFIT.

Housing sector spending rose last year on housing-related infrastructure, whereas spending on housing specifically again turned to decline with the slowdown in the boost of major projects in Moscow and continued drops in housing construction almost throughout the country. Growth in social spending, including pensions, slowed to a couple of per cent reflecting targets set for coming years. Spending on domestic security continued to increase rather slowly, while defence spending contracted slightly even in nominal terms.