Despite the weakening in private consumption demand, it rose in the fourth quarter still over 3 % y-o-y. At the same time, fixed investment fell by more than 5 % y-o-y in real terms. This reflects a much-degraded outlook for Hong Kong firms. Fixed investment last year corresponded to roughly 20 % of Hong Kong’s GDP.

The value of goods transiting Hong Kong to and from China increased sharply in the first three quarters of 2018, only to fall in the fourth quarter and in January. The movement of goods is critical for the success of the Hong Kong economy. Both the value of Hong Kong’s goods imports and the value of goods exports exceeds 150 % of the special administrative region’s GDP. The Port of Hong Kong’s container terminals are still among the busiest on earth, despite the rapid development of mainland China’s own ports.

While exports of goods produced in Hong Kong are tiny in relative terms, exports to China were up at the end of last year. In particular, the amount of jewellery sold to mainland Chinese has soared in recent months. Some observers speculate that the fascination with Hong Kong jewellery reflects Chinese propensities for skirting capital controls and seeking secure ways to preserve wealth.

Exports of neighbour countries to China 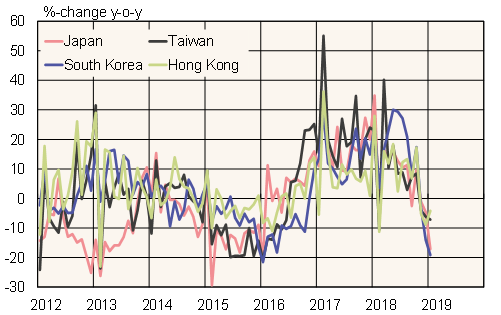