On February 8, Moody’s upgraded Russia’s credit rating score by a notch from Ba1 to Baa3, its tenth-best rating score. Bonds in the top-ten ratings categories are generally considered “investment grade,” while those below are considered “junk.” The assessments of all the big three international ratings agencies are now consistent. Standard & Poor’s made a similar upgrade to its rating of Russian sovereign bonds in February 2018, while Fitch never dropped its rating as far, preferring to keep with its BBB- rating in recent years.

According to Moody’s, the Russian government has implemented prudent fiscal policies during recent years. At the core of these policies is the accumulation of foreign currency into the National Welfare Fund. In addition, the Russian government has relatively little debt, and the amount of debt owed to foreigners has decreased. Moody’s notes that the fiscal policies have contributed to the government’s ability to weather both a major slump in oil prices and the pressures of sanctions. On the other hand, Moody’s observed that the government’s heavy involvement in the economy drags down growth.

There are other indications that the financial situation of state entities may be changing to some extent. The state-owned gas giant Gazprom plans to return to issuing dollar-denominated bonds. However, the debt may include the same unusual clause that Gazprom used already in November when it issued euro-denominated debt. Apparently to hedge against further sanctions, Gazprom reserved the right to pay back the debt in a currency other than euros if, for some reason beyond its control, it was unable to repay in euros. The Russian government also used a similar clause last year. 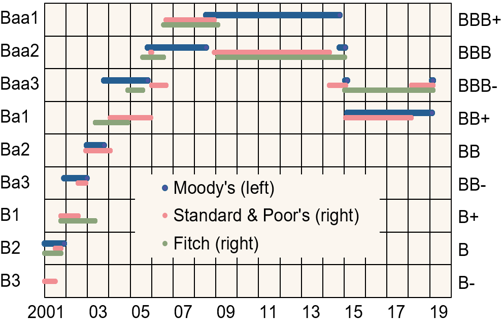