At the end of January, the value of the People’s Band of China’s total official foreign reserve assets was 3.186 trillion dollars. Some 97 % of the reserves were held as foreign-currency assets, typically debt securities such as treasury bills in major currencies. Gold made up over 2 % of China’s reserves, with other assets constituting less than 1 % of China’s holdings. China does not reveal the composition of its foreign currency reserves.

China by far has the world’s largest foreign currency and gold reserves. Although gold constitutes a small fraction of the PBoC’s reserves, it still amounts to about 1,870 tons, making it the sixth largest gold hoard of any central bank. The 8,100 tons of gold held by the US Federal Reserve are by far the world’s largest, with gold accounting for 75 % of the Fed’s forex and gold reserves. The next largest gold reserves are held by the central banks of Germany, Italy, France and Russia, in all of which the share of gold is quite large relative to total reserves. 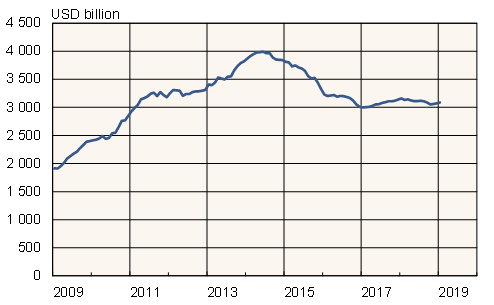