The hike in the value-added tax (VAT) at the start of this year from 18 % to 20 % had a lower-than-expected impact on consumer price inflation in January. It seems that the effects of the VAT hike will gradually pass-through to consumer prices over coming months.

As 12-month inflation is currently running near the lower bound of the Central Bank of Russia’s (CBR) inflation forecast for this year (5–5.5 % at the end of this year), the CBR left  the key rate unchanged (7.75 %) at its rate review meeting on February 8. The CBR expects annual inflation to settle back to its target level of 4 % in the first half of 2020. However, real interest rates in Russia are still rather high as the nominal average rate for corporate loans for over 12 months hit 9.2 % in December.

Interest rates and inflation in Russia 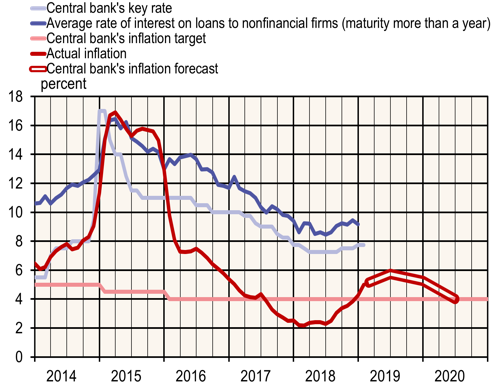