Russian customs reports that in 2018 the country’s goods trade surplus climbed to 212 billion dollars, or roughly 12 % of GDP.

Russian goods exports rose by 26 % from previous year. This reflects changes in both quantities and prices. Some of these may prove to be temporary. Energy prices are a major driver of fluctuations in Russia’s case.

The EU accounted for 46 % of Russian exports, while 12 % went to China. Two-thirds of earnings from goods exports came from fossil fuels. The combination of a slight increase in oil and gas export volumes and higher world prices raised export earnings by a third. In addition to fossil fuels, there were also significant increases in exports of metals and grains. With the bumper crop of autumn 2017, 2018 wheat exports were up by a third from 2017. Russia produces about 10 % of the world’s wheat. In recent years, about half of Russia’s wheat production has gone to exports.

The trend in exports last year was not reflected in imports. Russians spent only 5 % more on imported goods in 2018 than in the previous year. Import growth was depressed by ruble depreciation of more than 10 % against the dollar and euro.

About 37 % of Russia’s goods imports last year came from the EU and 22 % from China. While half of imports consisted of machinery, equipment and vehicles, growth in the category was modest. Pharmaceuticals and foodstuffs were also important import good categories. 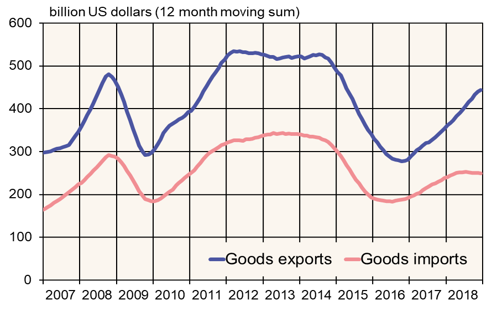