The People’s Bank of China announced last Friday (Jan. 4) it was lowering bank’ reserve requirements by one percentage point. The cut will be accomplished in two rounds on January 15 and 25. While the easing frees up roughly 1.5 trillion yuan (220 billion dollars) in bank reserves, only about half will be available to boost banking sector liquidity. The remainder will go to servicing repayments of maturing central bank MLF loans. The PBoC usually tries to increase liquidity ahead of the Chinese Lunar New Year celebrations.

The general level of the reserve requirement ratio (RRR) for large banks falls to 13.5 % and for smaller banks to 11.5 %. China sets RRRs for each bank separately, so they can diverge from the general level. For example, banks whose loan portfolio consists a lot of so called small corporate loans are entitled to a lower RRR than other banks. At the start of this year, the PBoC changed its definition of small corporate loans to  loans less than 10 million yuan (1.5 million dollars) per firm. The earlier ceiling was 5 million yuan.

China has sought to refocus monetary policy to ease the access of small firms to financing. At the end of December, the PBoC launched a new targeted credit instrument that allows large banks the seek long-term central bank financing at slightly cheaper rates. The banks entitled to cheaper financing and how much were not specified.

It is difficult to monitor Chinese monetary policy, which is implemented through a variety of targeted monetary instruments for which exact information is not released. The PBoC sought to head off any speculation of a broad-based stimulus by stressing that a drop in the reserve requirement does not signal a shift in monetary policy, even if the measure was said to aim to support growth. 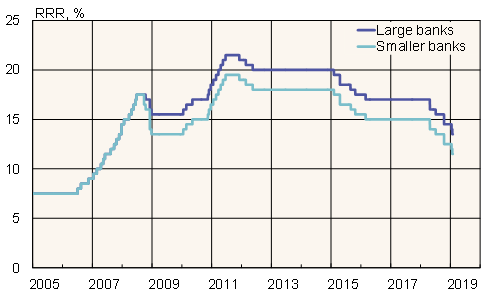