Figures from the National Bureau of Statistics show industrial output growth slowed in November to around 5 % y-o-y, while retail sales remained under 6 % for the second month in a row. Despite a slight pick-up in fixed investment last month to 5 % y-o-y, weak import and export trends reinforced the perception of a substantial slowdown in China’s economic growth.

The situation of the car industry is interesting as the performance of carmakers extends to many other industries and is widely seen as a measure of consumer sentiment. Car sales fell 16 % y-o-y in November, the fifth consecutive month of decline. For the first time in several decades, it appears that growth in car sales will be negative for the entire year. Regarding other consumer goods, mobile phone sales and production seem to have declined which has caused a drop, for example, in the sales of some industrial robots. Some of this has to do with the maturation of China’s mobile phone market, uncertainty caused by the trade war with the US and problems in export markets.

China’s official statistics, long criticised for their failure to provide a reliable basis for realistic appraisal of economic conditions, are unlikely to improve much over the near term. The central government this week forbid Guangdong province from releasing its own manufacturing purchasing managers’ index. The move only added to suspicions that the Chinese economy is in weaker shape than official numbers suggest. 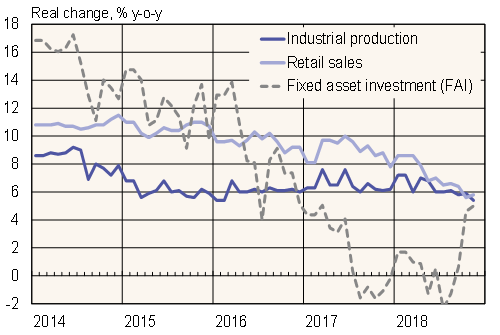