The Central Bank of Russia decided to raise the key rate by 25 basis points to 7.75 %. The increase went into effect on Monday (Dec. 17). The CBR last raised the key rate in September. The CBR also announced that on January 15, 2019 it would resume foreign-currency purchases, which were on halt in fall, in accordance with the fiscal rule on behalf of the finance ministry.

The CBR said its decision was driven largely by inflation risks that have remained elevated over the short term. The CBR estimates that on December 10 consumer price inflation was running at 3.9 % y-o-y. It pointed, however, to the upcoming increase in the value-added tax from 18 % to 20 % at the start of next year and the ruble’s depreciation this year of about 15 % against the US dollar (and about 10 % against the euro) as factors that will fuel inflation next year. The CBR expects inflation to be in the range of 5—5.5 % at the end of next year, potentially spiking temporarily in the first half to as high as 6 %. Under the forecast, inflation settles back to the CBR’s 4 % target level in the first half of 2020. Capital outflows from emerging economies and geopolitical factors were mentioned by the CBR as some of the external inflation risks. In addition, the CBR noted the increased risk of a glut in global oil supplies next year.

The CBR’s rate on interbank overnight deposits moved up to 6.75 % after the key rate decision. Overnight interbank money market rates (MIACR and RUONIA) stood at about 7.6 % at the start of the week. For ruble corporate loans from banks (not including Sberbank) with maturities over one year, the average lending rate in October was 9.2 %. 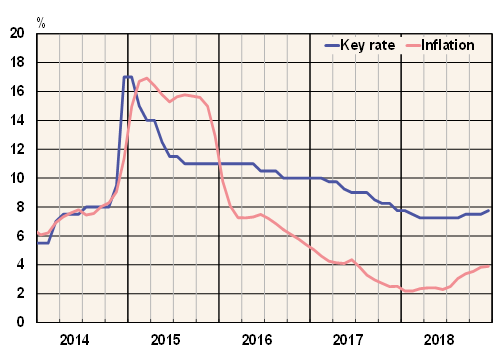