China’s National Bureau of Statistics reports that this year’s summer harvests (139 million metric tons) roughly match the scale of last year’s bumper harvests. The summer harvests represent about a fifth of China’s total harvests for the year. Although the autumn harvest figures have yet to be published, they are expected to be similar to last year’s harvest numbers.

China’s annual grain harvest in recent years has hovered around 660 million tons. After the 2003 crop failure, harvests grew quickly to current levels. Much of the improvement reflects higher productivity, but the area of land under cultivation has also increased. Production efficiency has been boosted through improvements in irrigation and fertiliser use, as well as a shift to higher-yield cultivars. The use of modern farm equipment has also increased.

Like other statistical data in China, agricultural figures should be viewed critically. A good example is the NBS’ large upwards revisions this autumn of its figures for grain harvests and land under cultivation for the period 2007–2017. New figures show maize production last year exceeded previous estimates by whopping 43 million tons. The revision is huge; it boosts Chinese maize production by 20 % and global production by 4 %. The sizes of the wheat and rice harvests were also understated previously by several million tons.

China strives for self-sufficiency in certain major crops. It supports producers of critical crops through such measures as price guarantees. In the case of maize, a very costly price-guarantee subsidy was dropped in 2016. In 2017–18, the sell-off of state maize reserves purchased at the guaranteed price is estimated to have cost the government nearly 30 billion dollars. Rice and wheat still enjoy price guarantees. 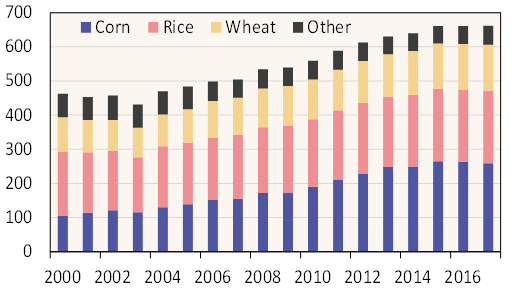