The Central Bank of Russia reports that the total foreign debt of Russian banks and other Russian corporations stood at around 428 billion dollars as of end-June. Some 21 % of that debt was denominated in rubles, 57 % in dollars and about 20 % in euros.

The foreign debt of non-financial corporations has contracted over the past four years. At the same time, the share of debt liabilities to direct investors in corporate sector’s total foreign debt has constantly increased. In June the share was over 40 %. About a third of corporate credit stock (103 billion dollars) was large state-owned enterprise debt. When liabilities to direct investors are excluded, only 5 % of foreign borrowing of state-owned enterprises is denominated in rubles. In contrast, about 30 % of the foreign borrowing of private firms is in rubles. Not counting the debt and receivables associated with direct investment, the value of the foreign net assets of the non-banking corporate sector was close to zero.

Total foreign debt of banks and other firms, USD billion 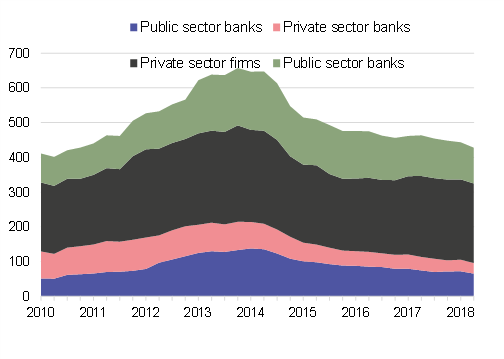