­Real on-year GDP growth in China’s 31 regions (provinces, first-tier municipalities and autonomous regions) during January-September ranged from 9.1 % in Yunnan to 3.5 % in Tianjin. GDP growth nationally in the period was 6.7 % p.a.

Nominal GDP growth varies even more than real growth across regions. In January-September, the GDP of Inner Mongolia was over 10 % smaller than in the same period last year. In contrast, Ningxia’s GDP grew by nearly 14 %. Comparisons of nominal growth overlook regional price trends, which can be significant due to e.g. production structures. Variations in consumer prices, however, were marginal.

Standards of living vary considerably within China. Last year, GDP per capita in northwest China’s Gansu province was just 28,500 yuan (USD 4,100), a level comparable to per capita GDP in Algeria or Georgia (not purchasing power adjusted). GDP per capita last year was 129,000 yuan in Beijing and 127,000 yuan in Shanghai. These GDP per capita levels of USD 18–19,000 are similar than those of Greece or Slovakia. 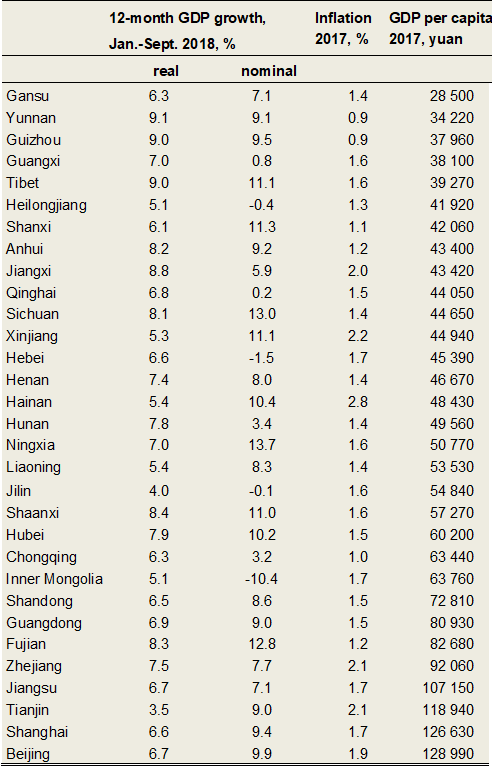