Real estate market tracker SouFun reports that the average city apartment price in China in recent months has hovered around 16,600 yuan (EUR 1,800) per square meter of liveable floorspace, a 5 % increase from last year. Price increases have been quite modest this year, however, in China’s four biggest cities. The average square-metre price for apartments in Beijing was 42,500 yuan (EUR 6,000) in October.

Housing price trends vary widely from city to city. SouFun’s 99-city sample reveals that in some cities average prices are slightly lower than a year ago, while prices in some other cities are up by as much as 20 % y-o-y. Some of the deviation reflect regional differences in rules governing real estate sales. When officials tighten regulations, speculative buyers shift their buying to other cities.

Growth in apartment sales volume (measured by floorspace) has slowed to around 2 %, while the volume of new construction has soared to levels not seen since the start of the decade. Lower demand growth could put downward pressor on prices. Falling prices, in turn, create a danger that sold, but unoccupied, apartments end up back on the market. There are many such apartments in China (10–20 % of the housing supply by some estimates). Falling prices would be particularly bad news for heavily indebted apartment-builders. The Financial Times reports that the debt-servicing of builders next year will amount to 385 billion yuan (USD 55 billion) on domestic borrowing, with an additional USD 14 billion on foreign loan servicing. 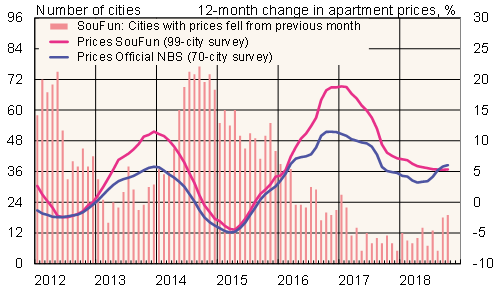