Even as China’s trade war with the US escalated, foreign direct investment flows into China increased in the first nine months of this year compared to the same period in 2017. Also Chinese outbound FDI also increased. The picture of investment trends, however, show some variation depending on the statistical data used.

China’s commerce ministry (MOC) reports that FDI flows into China (excluding the financial sector) amounted to 98 billion dollars in January-September, an increase of 6 % from the same period last year. However, China’s balance-of-payments figures diverge considerably from the number offered by the commerce ministry. According to the first-half balance-of-payments figures, 126 billion dollars in foreign investment flowed into China – more than double the amount of 1H17.

Compiling FDI statistics is notoriously difficult in every country and interpreting them even more so, as in the current globalized world investments may not originate from the investor’s home country. Commerce ministry figures show that Hong Kong accounts for 65 % of inward FDI to China. Other Asian countries and certain tax havens also provide considerable amounts of FDI. The EU accounts for around 9 % of investment flows into China, while the US contributes just 2 %. As part of its trade negotiations, China has opened up certain branches such as the car industry and finance to more extensive foreign ownership in an effort to encourage more FDI inflows. The trade war itself has forced many foreign firms to consider pulling their production out of China altogether.

Commerce ministry figures show the flow of outward FDI of Chinese firms in the first nine months of this year amounted to 89 billion dollars, an increase of 6 % y-o-y. Outward FDI growth was quite strong in the first half, but turned negative in the third quarter. China’s balance-of-payments figures show outward FDI roughly following a similar trend to that shown in the commerce ministry figures. The value of investment in January-June (46 billion dollars) was up 12 % y-o-y.

According to the China Global Investment Tracker (CGIT) database compiled by the American Enterprise Institute and Heritage Foundation, foreign investment of Chinese firms abroad fell in the first half relative to 1H17. In the January-June period, large FDI expenditures of Chinese firms (FDI of more than 100 million dollars) amounted to only 56 billion dollars, down from 101 billion dollars in the same period last year. Last year’s figures, however, got a huge boost from the June 2017 purchase of the Swiss agribusiness giant Syngenta for 43 billion dollars. CGIT reports that in the first half of this year, 35 % of investments went to Europe and 10 % to the US. These shares were slightly smaller than in the first half of 2017. 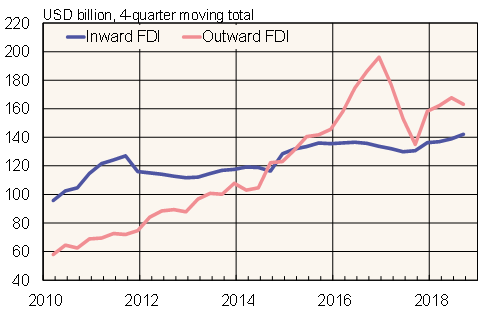