In the first half of this year, 5.4 % of Finnish goods exports were destined for China, while 6.6 % of goods imports came from China. China is thus Finland’s fifth-most-important export market after Germany, Sweden, the US and the Netherlands, and Finland’s fourth-largest import provider after Germany, Russia and Sweden.

Finnish imports from China declined slightly or remained unchanged in the main broad categories (machinery & equipment, basic and other manufactured articles) compared to 1H17. There was more volatility in exports, however. The value of exports of Finnish machinery & equipment, as well as chemicals, declined substantially, while exports of raw materials and basic and other manufactured articles were up.

The services trade balance between China and Finland has been positive since 2016. Statistics Finland reports that the value of services exports to China in 1H18 was 650 million euros against services imports of 420 million euros (resulting in a surplus of 230 million euros). While Statistics Finland does not publish a breakdown of the structure of services trade by country monthly or quarterly, its figures for tourism show clear declines in the numbers of Chinese arriving in Finland and spending the night in Finnish lodgings during the May-July period compared to a year earlier. Last year tourism accounted for 14 % of Finland’s services exports to China. 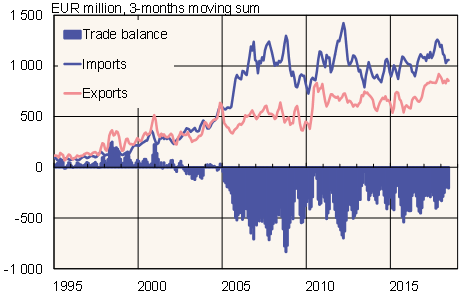