Ruble depreciation has had a dampening effect on the growth of Finnish exports to Russia this year. While the value of Finland’s imports from Russia has grown, this is mostly due to higher oil prices.

In the first six months of this year, Russians purchased in euro terms roughly the same amount of Finnish goods as in the same period last year. The annual value of Finnish goods exports to Russia is over 3 billion euros. Machinery and equipment account for about a third. Other significant export products include paper and chemical products.

Russians spent 5 % more on Finnish services in euro terms in the first half of this year than they did in the same period last year. Annually more than 1 billion euros are spent, with about half related to travel. Other important service export categories include construction, transportation and data services.

Finns purchased about 3 % more Russian goods in euro terms in the first half than in the same period last year. Due to the one-off delivery of a gas pipelines last year, the reference point is quite high. Without it, Finnish imports from Russia increased by over 10 %. Finns annually buy about 8 billion euros worth of Russian goods. About two-thirds of it comes in the form of fossil fuels, while the rest is mostly metal or wood products. Russia supplies Finland annually with roughly 10 million metric tons of crude oil, which corresponds to 2 % of Russia’s crude oil production and accounts for about 90 % of Finland’s crude oil imports. Finland also imports refined petroleum products and natural gas from Russia. At current prices, the value of Finland’s annual fossil fuel imports is roughly six billion euros. However, this is not solely net imports, as a large share of crude oil is used as an input to make various export goods. 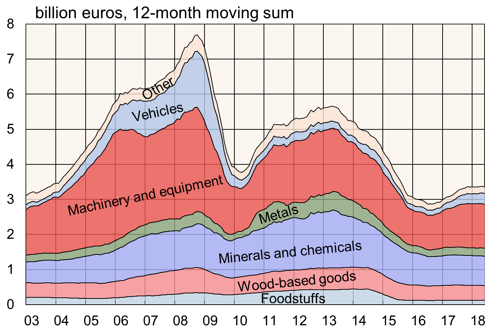