As scheduled, the weight of Mainland Chinese shares was increased in the MSCI Emerging Markets Index at the beginning of September (BOFIT Weekly 22/2018). However, their weighting in the index is still quite small. Despite the fact that China represents a roughly 30 % weighting in the MSCI Emerging Markets Index, only 0.8 percentage point comes from mainland China A-shares. This amount is miniscule considering that Hong Kong-listed Chinese Tencent represent alone nearly 5 % of the MSCI EM weighting, or that, Alibaba, a heavy on the New York Stock Exchange, has a nearly 4 % weighting. Index provider FTSE Russell is expected to follow suit with MSCI by including mainland Chinese shares in its flagship indexes.

Share prices have slumped in mainland China this year. The slide accelerated at the beginning of June on rising fears about a trade war, China's own deteriorating domestic economic conditions and increased risk facing financial markets. On Wednesday, the Shanghai Composite Index was down 20 % from the start of the year, while the Shenzhen Composite Index was off by 26 %.

As expected, MSCI's move of giving more weight to mainland shares in its emerging markets index has had little impact on foreign holdings of mainland shares. Foreign holdings of Chinese shares increased by 125 billion yuan (18 billion dollars) in May, but fell by 45 billion yuan in June along with a fall in equity prices. Foreign investors owned 1.275 trillion yuan (190 billion dollars) of mainland China shares at the end of June, about 2.5 % of the Chinese stock exchanges' market capitalisation. Foreign investor trading on the Shanghai and Shenzhen stock exchanges via the Stock Connect arrangement with the Hong Kong stock exchange also showed almost no reaction to the decision to include mainland shares in major emerging market indices.

The Chinese government has taken steps to enhance the appeal of Chinese stocks to foreign investors. To show good faith in current trade dispute talks, China announced an easing of foreign ownership rules and extended shareholding possibilities to such critical sectors as car manufacturing and finance. In June, the restrictions on participants in the QFII and RQFII programmes for qualified foreign institutional investors were relaxed by abolishing monthly repatriation limit of 20 % of net value of the portfolio in the previous year.

Starting Monday, China will attempt to attract new investors to the market by allowing qualified foreigners operating in China to trade directly on mainland stock exchanges. This pool of potential investors is estimated to contain nearly a million people. At the same time, firms listed on stock exchanges in mainland China will be permitted to offer stock incentives also to their foreign employees. 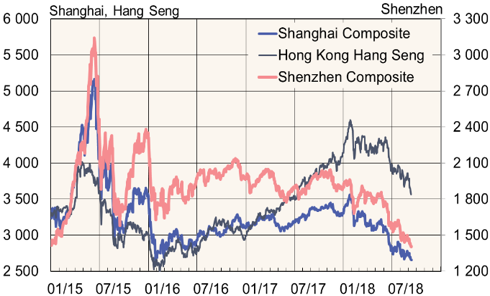