According to the July forecast by Russia's economic development ministry, Russia will this year produce 549 million tons of crude oil (about 11 million barrels a day), which is about half a percent more than last year. Crude exports are expected to total about 250 million tons and exports of domestically refined products about 150 million tons.

The ministry forecasts that both output and exports will grow by about 1 % a year over the next two years and plateau thereafter. According to several estimates, Russian oil output will begin to decline sometime within the next ten years. However, forecasters have been continually pushing the date of Russian peak oil further into the future.

New fields are being brought on stream in both Russia's traditional oil production areas on both sides of the Urals as well as in the Yamal region and Eastern Siberia. As in many other countries, the advent of hydraulic fracking has made it possible to exploit a considerable amount of previously intractable deposits. Sanctions, however, complicate to some extent adoption of the latest technologies as well as upgrading current equipment and facilities. 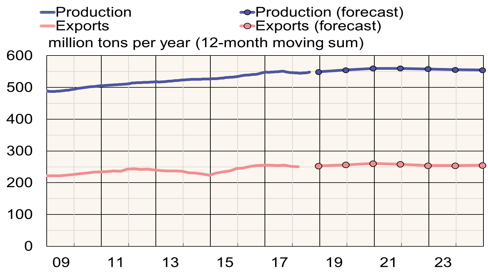