China customs reports that growth in goods trade last month was roughly the same as in previous months. On-year growth in the value of exported goods remained at around 10 % y-o-y, while the value of goods imports rose by about 20 %. Growth in the volume of imports has been double that of exports. Robust import growth has reduced China's overall trade surplus. However, there is much variation in bilateral trade balances as illustrated in the chart below.

China customs adds that growth in goods exports to the United States remained strong last month, outpacing growth in exports to both Japan and Europe. As a result, China's trade surplus with the US hit an all-time high in August. US customs figures back up the growing imbalance in trade with China. US imports have accelerated on strong growth of the US economy, creating strong import demand with countries other than China as well. Moreover, imports from China have picked up as firms operating in the US have moved up scheduled shipments from China in anticipation of higher tariffs.

China's trade war with the US continues to escalate. The US last week completed hearings on raising import tariffs on Chinese imports worth about 200 billion dollars a year. At the conclusion of the hearing period, US president Donald Trump announced the US could move ahead rapidly in expanding the tariff regime to apply to all imports from China.

China has announced it is ready to impose its own new tariffs. To ease the distress of its struggling export industries, China's finance ministry announced increases in export tax rebates on nearly 300 products. 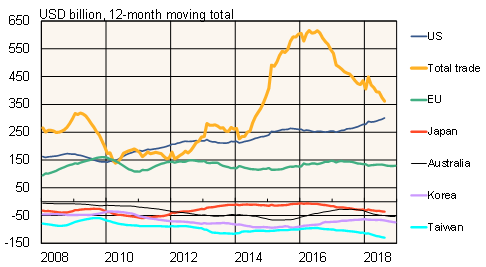