Chinese housing-market tracker SouFun reports that apartment prices in Chinese cities have generally risen this year, but at a slower pace than last year. SouFun's 99-city survey of apartment prices shows that the average price for one square metre of apartment floorspace in July was 14,400 yuan (1,800 euros), an increase of just over 5 % y-o-y. In the four biggest cities in the survey, the average square-metre price in July was 5,100 euros, unchanged from the start of the year.

New apartment construction starts in the first seven months of the year were up by more than 25 % from the same time last year. In the same period, construction starts on new office buildings and commercial space ran at the same pace as a year earlier. In the January-July period, the volume of apartment sales measured in terms of liveable floorspace increased by about 3 % y-o-y. The volume of completed apartment (m2 of floorspace) declined by 18 % from a year earlier, and, consequently, the volume of pending sales of apartment also deteriorated steadily. 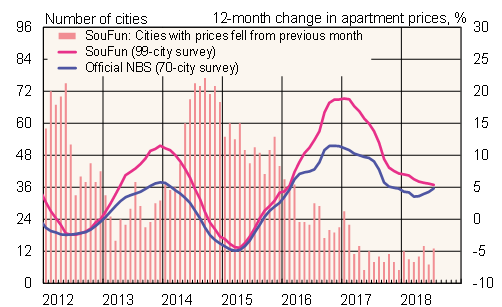