Revenues to the consolidated budget (federal, regional and local budgets plus state social fund budgets) increased by over 15 % y‑o‑y in the first half of this year. The rise of oil and gas tax revenues from higher oil prices accounted for nearly half of the revenue increase. The revenues stood for about a quarter of total consolidated budget revenues.

Other budget revenues increased by about 10 % y-o-y, with the top four revenue streams rising by 12−15 %. While the share of the top four sources in total revenues decreased slightly, the share was still nearly 60 %. The top four breakdown is led by the mandatory social contributions by firms (20 %), value-added taxes (17 %), corporate profit taxes and personal income taxes (each roughly 10 %).

Consolidated budget spending increased in the first half of this year by well over 5 % y-o-y, driven by a clear pick-up in spending in the second quarter. Spending on healthcare and education increased fastest (about 15 % y-o-y), in line with the Russian leadership's current guidelines on raising budget spending in these categories. Spending on civil administration rose well over 10 %, while revised figures show spending on defence, domestic security and law enforcement increased by 6 %. Spending on social security rose by just 4 %, due e.g. to the fact that general increases in old-age pensions were limited this year to levels slightly above the inflation rate.

The government sector deficit contracted last year and in the first half of this year. Over the 12-month-period ending in June, the budget showed a slight surplus of 0.1 % of GDP. 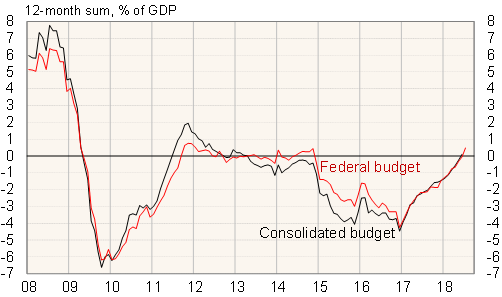