The broad descriptor of domestic private sector credit (total social financing or TSF) corresponded to 212 % of GDP in end-June. The figure indicated a slight drop in the debt-to-GDP ratio that stemmed from a crackdown on lending outside the official banking sector. The TSF aggregate includes some type of shadow banking sector instruments such as trust loans, entrusted loans and bank acceptance bills (a kind of IOU). This unofficial lending component, which equals roughly 30 % of GDP, shrank for the first time, falling by 5 % between December 2017 and June 2018. Bank lending grew by over 12 % y-o-y and now exceeds 150 % of GDP.

The TSF aggregate describes private sector financing. The Bank of International Settlements reports that the total Chinese credit stock (including government debt, but excluding financial sector debt) was 256 % of GDP last year. BIS figures show that China's debt-to-GDP ratio declined in the fourth quarter of 2017 for the first time since 2011.

The shrinking debt-to-GDP ratio may be short-lived, however. To preserve growth amid market uncertainties, the monetary policy stance has been made more accommodative and China may also need to relax its stiff stance on curbing shadow bank lending to reduce financial market risk. Media reports note, for example, that implementation of tighter regulation of wealth management products has been delayed. 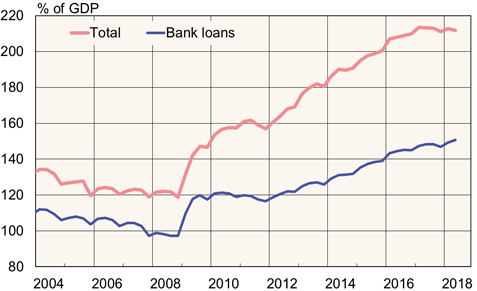