China's National Bureau of Statistics reports that GDP grew at 6.7 % y-o-y in the second quarter, a slight slowing from the 6.8 % pace of the previous three quarters. China's eerily consistent GDP growth figures do not reflect the severe slowdown in the monthly figures for fixed asset investment (FAI). Fixed asset investment data indicate on-year drop in second-quarter public sector investment, which is also reflected in a significant slowdown in growth of infrastructure investment.

The NBS further noted that final consumption expenditure contributed to nearly 80 % of April-June GDP growth. NBS figures, however, show slowdowns in both retail sales and income growth. Real disposable income per capita rose by 6.7 % y-o-y in real terms in the first half of 2018 (7.3 % growth in 2017). Growth in retail sales slowed in the second quarter with real on-year growth falling to 7 % in June. 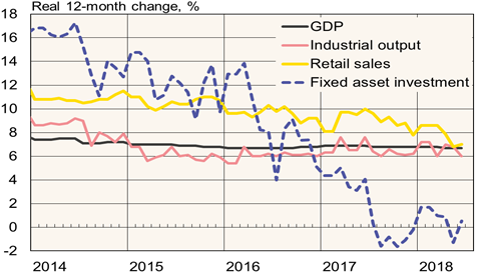