The problems of Chinese telecom giant ZTE began in March 2017, when it admitted to exporting US technology to Iran and North Korea in violation of US trade sanctions. ZTE is highly dependent on American technology. For example, over a quarter of its smartphone components are of US origin. ZTE was fined 1.2 billion dollars for violating trade sanctions. It got permission to continue working with US firms on condition that it punished employees who violated the sanctions. After it emerged that ZTE broke its promise, the US commerce department on April 16 imposed a seven-year ban sales of US components to ZTE.

Due to the ban on component sales, ZTE announced it was halting production. Trading in the company's shares was also halted on April 17. When trade negotiations at the beginning of May hit a favourable patch, president Trump announced that he was lifting the ban on component sales to ZTE. A deal was reached and ZTE announced on June 12 that it had agreed to the terms laid down by the US commerce department. ZTE would pay a one-billion-dollar fine and place 400 million dollars in escrow for possible future violations. Additionally, all board members must be replaced within a 30-day period that began on June 8 both in ZTE and in its wholly-owned subsidiary ZTE Kangxum Telecom.

The matter continues to simmer in the US, however. On Monday (Jun. 18) the US Senate, which is controlled by a Republican majority, passed the National Defence Authorization Act, which includes language repudiating the ZTE deal. For the NDAA to become law, it still requires reconciliation with the earlier-passed House version of the bill, which did not contain any reference to ZTE. Although trade relations between the US and China are less than optimal, the Trump administration seems determined to remove the ZTE language from the bill.

After trading of ZTE shares was restarted last Wednesday (June 13) prices nose-dived. Even after bouncing back slightly on the Hong Kong exchange on Wednesday (June 20) ahead of Trump's meeting with Republican senators, ZTE had lost over 50 % of its market capitalisation in Hong Kong and 40 % in Shenzhen.

Price of ZTE shares on Shenzhen and Hong Kong exchanges 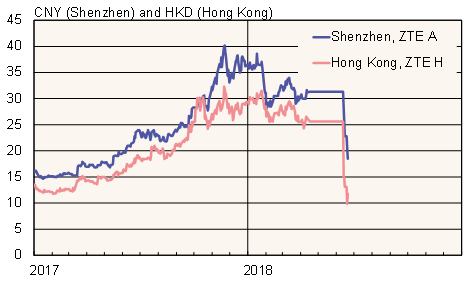