As of the first week of June, the yuan's nominal effective (trade-weighted) exchange rate, or NEER, had increased about 3 % in value since the start of the year. The appreciating trend now extends for over a year, during which time the yuan's NEER has climbed by nearly 6 %.

The US dollar has appreciated about 4 % in trade-weighted terms (NEER) since mid-April. In some emerging economies the strengthening dollar and rising interest rates in the US have hurt the domestic currency, fuelled inflation and added to capital flight pressures. In China's case, however, the yuan has remained relatively stable against the dollar, depreciating since mid-April by just over 1 %.

On the other hand, the weakening of the euro, especially on Italy's attempt to form a government, lifted the yuan-euro rate at the end of May by nearly 4 % from its mid-April level. In all, the yuan barely showed any overall appreciation in NEER terms in May.

Yuan exchange rate against US dollar, euro and basket of currencies of main trading partners (NEER) 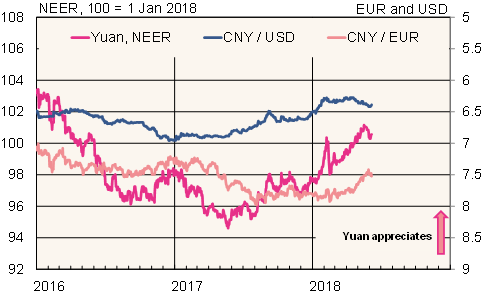