President Putin's inauguration Decree, issued on May 7, includes a goal of cutting Russian poverty in half by 2024. The Decree did not specify how to achieve this goal or how to estimate fulfilment of the target.

Definitions of poverty vary. In Russia, over 19 million people or 13 % of the population lived below the official subsistence minimum in 2017. The share was highest, about a fifth, among youths under the age of 16. The share of all those living below the minimum has shrunk considerably since 2000, although it rose in 2015 when inflation peaked. The subsistence minimum, which is a "minimum basket of consumer items", stood at a monthly income of just over 10,000 rubles in 2017 (less than 140 euros). For the entire population on average, the minimum basket last year contained over 45 % of food, with other goods and services each accounting for about a quarter.

Halving the number of poor would not appear very difficult as the share of people earning less than the subsistence minimum, but still more than 7,000 rubles a month, was over 7.5 % of the entire population last year. Lifting this group to the minimum would cost a couple of decimals of a percent of GDP or just over half a per cent of government consolidated budget spending (with several assumptions about the average income in the income groups). According to Rosstat's annual calculation, the cost of lifting all people living below the subsistence minimum to the minimum would have cost 0.8 % of GDP last year, or slightly over 2 % of government spending. With Putin in the lead, action was already taken before the May Decree by e.g. raising the minimum wage during the first months of this year to the subsistence minimum. Poverty diminishes naturally with economic growth. It will also get easier to deal with poverty if world oil prices stay high and thus support government budget revenues and the inflation rate of the minimum consumption basket remains reasonable.

Halving poverty would be harder with other criteria. For example, if the poverty line is defined as a widely used ratio to median income. 25 % of Russians last year had income at or below 60 % of the median income. The share is broadly the same e.g. in Serbia, and as regards the EU, basically in the lowest-income member countries, Bulgaria and Romania.

Population living below the official subsistence minimum and other income thresholds 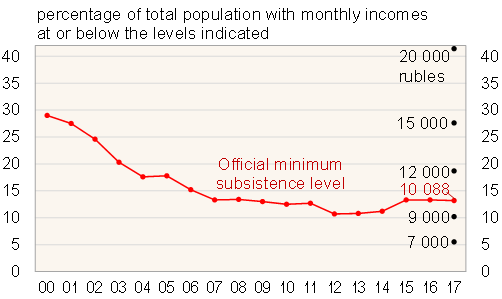