Finnish goods exports to Russia in the first quarter remained at roughly the same level as in 1Q17. The export trend was in line with Russian goods imports overall, with the euro value of imports rising by just 3 % y-o-y. Following strong growth in Russian import volumes last year, there has been a significant slowdown this year due e.g. to the weaker ruble. The development in euro terms has also been affected by euro appreciation against the USD from a year earlier.

Performance of Finnish goods exports to Russia varied significantly in the first quarter depending on the category. Exports of machinery, metals and paper rose, while exports of textiles, foodstuffs and chemical products fell.

The value of Finnish goods imports from Russia fell by 3 % y-o-y in 1Q18. Most of the contraction reflects last year's high reference point caused by a large one-off gas pipeline delivery. Finland's main imports from Russia – oil & gas – were up largely due to higher prices. 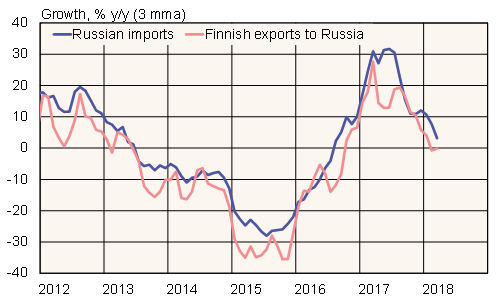