In the first quarter of this year, revenues to the consolidated budget (federal, regional and local budgets plus state social funds) were up by more than 10 % from a year earlier. The rise in revenues was nearly as fast as last year.

Budget oil revenues increased by well over 20 % y-o-y, which was about the same pace as last year. The oil revenues comprise five categories: taxes on production of crude oil and natural gas, and export duties on oil, oil products and natural gas. Export duties on oil and oil products, as well as the taxes on crude oil production are partly determined by export prices, which have been substantially higher this year than last year. Oil revenues in the first quarter increased their share to nearly 25 % of total consolidated budget revenues. The share has not been this high since 2015.

Other revenues to the consolidated budget continued to rise by nearly 8 % y-o-y in the first quarter, even if revenues from excise taxes plunged as the tobacco industry's output fell sharply last year. The biggest revenue streams (mandatory corporate social taxes, value-added taxes, corporate profit taxes, income tax) all increased by roughly 15 % y-o-y. This suggests that tax collection has improved further, as there have been no increases in these taxes. Value-added tax revenues have also grown due to imports which continued to recover rather briskly still early this year. 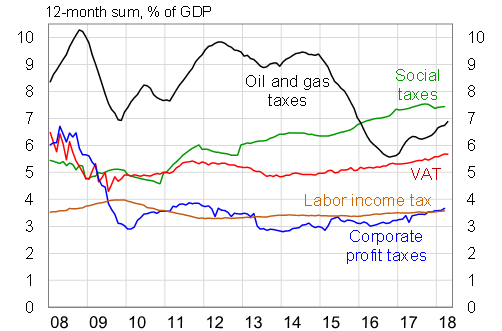 The consolidated budget deficit has contracted over the last twelve months to less than 1 % of GDP. Under the new federal budget rule, "excess" oil revenues are to be saved and transferred to the single reserve fund that Russia maintains since the start of this year, i.e. the National Welfare Fund, by autumn of the following year. Excess oil revenues arise when the realised oil price exceeds the annual base calculation price set in the rule. Both this year and last year have seen large inflows of excess oil revenues. The reserve fund holds liquid assets equivalent to more than 2 % of GDP, but last year's excess oil revenues have yet to be transferred to the fund. Overall, the Russian federal government had assets in the central bank equivalent to more than 6 % of GDP at the end of March.